A Farewell to Carbs

A 30-something navigating the world of Type 2 Diabetes while remaining fun, fashionable and fabulous.

I am trying to break myself of the horrible habit of snacking mindlessly in front of the TV.

I don’t have any television channels. Instead, I have a Netflix subscription and watch episode after episode of T.V. shows without commercials. Right now, I’m watching the first season of Boardwalk Empire. Before that, I plowed through BBC’s Luther. I’m anxiously awaiting A Game of Thrones to come out. And I’m kind of addicted to Big Bang Theory after watching the first two seasons in the space of a week. (I am not proud of this).

My T.V. habits mean I can spend several hours on the couch (time I should be spending on a treadmill at the gym), polishing off bags of Cool Ranch Doritos and pints of Ben and Jerry’s Phish Food with abandon. It’s not a coincidence that my best-laid diet plans usually fall apart around 11 p.m., when I get home from work exhausted and in need of mindless entertainment.

So to keep my hands busy, I’ve embarked on some craft projects. I have been designing greeting cards using stencils and colored pencils. And I bought some embroidery thread and tried a project I saw on Pinterest.( On it? Follow me!) 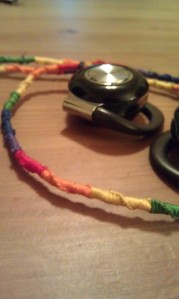 My headphone cord usually ends up in a snarled tangle of wires (are there evil little elves who do this in the middle of the night?). So the Pinterest project I found had you cover the wires with embroidery thread like a friendship bracelet. You can’t really tell from the photo, but my first attempt was not perfect. I ran out of thread about halfway down the first part of cord, so I had to tie more in, which left a big knot in the middle. The second piece of cord (attaching the left ear to the part that plugs in) went much better. I finished the ends with a liberal coating of clear nail polish to prevent fraying. And if I ever actually go to the gym, I’ll bet I get a few comments on them.

So far, my craft projects are working. Not only have I made gifts for friends’ birthdays for the next several months, I am keeping my hands busy. I can’t eat if I’m occupied. I’m hoping I can retrain my brain not to automatically want to reach for the chips and ice cream when I sit down on the couch. Either that, or start an Etsy account to feed my craft habit.

Your turn: Do you snack in front of the television? What are some strategies you use to curb that habit?