A Farewell to Carbs

A 30-something navigating the world of Type 2 Diabetes while remaining fun, fashionable and fabulous.

My schedule, both personal and professional, has never fit into what most people would consider normal. I wake up later than most people, and I often am at work for a period that spans two meal times. 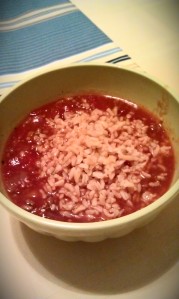 Stuffed pepper soup, thanks to Skinnytaste.com

This is why I’ve had such trouble binge eating at night — I often don’t eat enough during the day and then overdo it when I finally get home and don’t have anything more to check off on my to-do list.

Since my goal for March is to stop eating after 9 p.m., it means rethinking how I approach mealtimes. As a diabetic, I need to eat small meals regularly to keep my blood sugar levels from sitting in the front seat of Coney Island’s Cyclone.

So this past week, I thought I’d make it a point to plan out breakfast, lunch, dinner and two snacks — and aim to eat them between 9 a.m. and 9 p.m.

I’ve also been feeling a little uninspired by my recipe collection. So I turned to a site that a friend raves about: Skinnytaste.

Put simply, Skinnytaste’s site is amazing. Ah-may-zing. I decided that I wanted to do a soup packed with veggies for lunch and I really, really wanted pasta for dinner. So after surfing around a little, I found Stuffed Pepper Soup and a Cajun Chicken Pasta. Both were relatively easy to make and absolutely delicious.

A few notes: The chicken pasta dishe is a smidge hgh in carbs for my eating plan, so I cut back the amount of pasta by about 2 uncooked ounces. I also premeasured the pasta and then poured the chicken-veggie-sauce mixture over top.

The soup was out of this world after I added a little cumin and some paprika. Skinnytaste has you add the rice separately, which is nice because you know how much you’re getting. Instead of portioning that out into separate containers, I kept the soup in a large plastic container and the rice separately and then measured out a serving for each lunch.

Skinnytaste provides both the nutrition content and the Points Plus value on every recipe. Both recipes were Points bargains and the pasta was so good, I actually entered all the ingredients into a recipe calculator and made sure the nutrition information was accurate. It was, of course.

I am really looking forward to trying more of her recipes out.